Have you ever wanted something so badly that you were willing to make sacrifices in order to make it happen? Or perhaps you were like me who thought that what you wanted was too much for God and that you would be happy with anything/anyone really.

This describes my journey of finding love. It was filled with excitement, doubt, frustration, growth, and…awkwardness. There’s a movie called “He’s Just Not That Into You” that I wish came out while I was in high school. It could have saved me some awkwardness though then I wouldn’t have good stories to share.

I thought I knew what I wanted. Atleast I pretended that I knew what I wanted. That is until my attempts at getting a boyfriend came up empty. I wanted a boyfriend (perhaps because it seemed like everyone else around me had a significant other) and was willing to be flexible on who that boy was (Deep down I wanted to meet the one and I was hoping that every guy I dated was the one). Am I the only one who has ever done something like this? I dated guys but apparently I “liked” them more than they liked me. My best friend Ester reassured me that “when you meet the one, you’ll know.”

The problem was not the selection of boys out there, the issue was my view of the world was blurry. I was blurry on what was important to me, what I wanted in a partner, and what I call the “non-negotiables.” And so, I took the advice of my good friend Kristina who suggested that I write down who exactly this “dream” guy is…

I opened up my journal and wrote line-by-line about “Mr Right. I had written something on every line of the page including the back! And then a couple of days later, I went back and added a couple more elements (apparently the previous description was not enough/complete). I remember reading it and thinking “boy, am I specific.” This was in 2008.

*For those of you curious folks, here is a photo of what I wrote…. 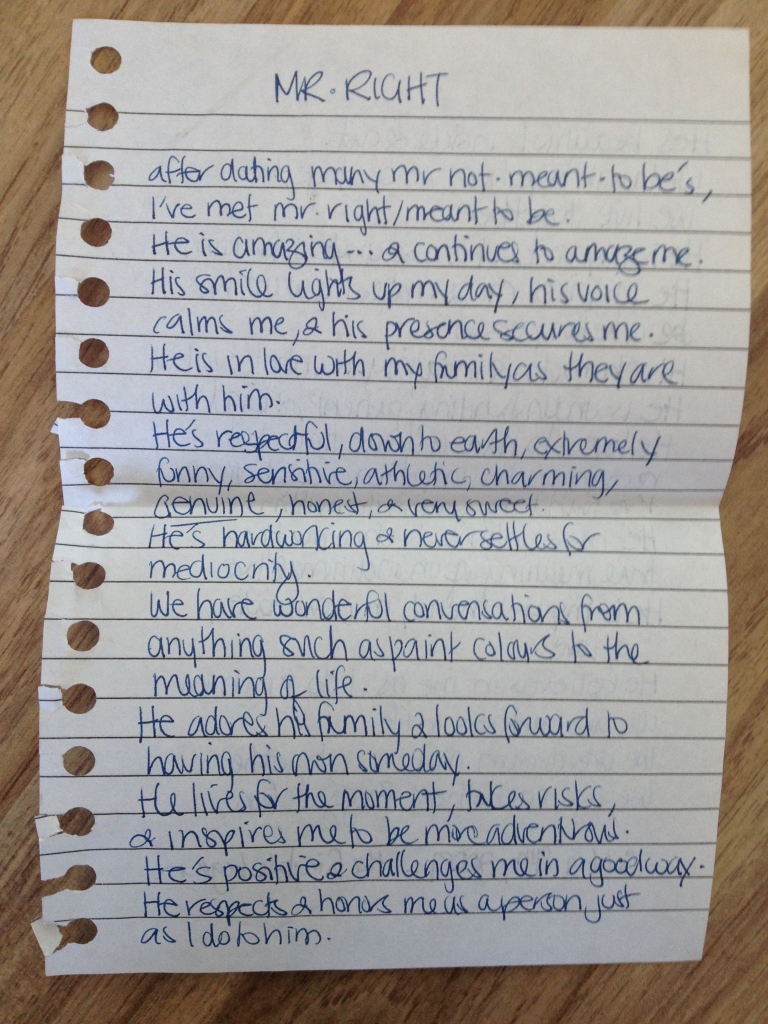 I remember spending time with Mr. Right (at this point it was Mr. Right on paper) and wondering if this was going to work. Would life, would God really bring me someone that was every single feature I described? The first guy I dated post “Mr. Right” exercise, turned out not to be “Mr. Right.” The second guy I dated was not the one either. And then something happened.

In 2009, I attended one of my old roommate’s wedding. I was coming out of a relationship at that time (the guy I had been dating for a while became defensive when a friend referred to him as my boyfriend. “I am NOT her boyfriend”-his words exactly). I had heard about this guy named Drew for years but didn’t really know much about him other than my friend (who was in the wedding party with him) say that he was her date. We talked briefly at the wedding. His first words to me “can you watch my drink?” I thought nothing of it…that is until he contacted me a few days later. The next day to be exact. We exchanged messages and I remember thinking “this guy is really interesting.” Fast forward a couple of months and this guy turned out to be THE guy. And just like Ester said, “when you meet him, you’ll know.” I knew. In 2013, this guy became my husband.

I remember early in our relationship, I went back and read my “Mr Right.” And as I thought about Drew and read the list, I was in awe because Drew was everything on that list.

The crazy thing is, Drew and I had crossed paths three years earlier in 2006 at my friend Alison’s party (the girl whose wedding we re-met at). I was on my way out and he was on his way in. He wondered about me, I wondered about him but that was the end of it. Who would have known that “Mr Right” had been in my life for a while, I just didn’t know it. I often what other things God has shown me about my future.

To all you single folks out there, DO NOT GIVE UP and DO NOT SETTLE. Your soulmate is out there and when the timing is right, you will meet him/her. My invitation to you is the same invitation Kristina gave to me in 2008, get clear on who it is you are looking for. You may not know his/her name or exact height, etc. but give yourself the opportunity to figure out what is important to you (in terms of values, personality, lifestyle, etc.). After  you write it out, spend time with your soulmate (on paper) regularly (whether you read it every morning or every night).

Hot off the press